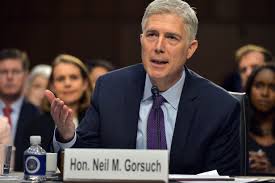 But that’s only part of the issue. What the Supreme Court did in upholding the ban is actually very common. The Court added a provision that said the ban only applied to travelers from the six listed countries who did not have a “bona fide relationship with a person or entity in the United States.” It did this under what is known as “equity jurisprudence.” When courts deal with an equitable remedy, like an injunction, they have the ability to do what they feel is fair.

It is based on such equitable powers that courts in the 1960’s and 1970’s did such things as desegregate schools, and mandate busing to achieve integration. It was these sorts of acts that conservatives labeled “legislating from the bench.”

When conservative Supreme Court nominees, like Neil Gorsuch, testify before the Senate and swear that they will never “legislate from the bench” they are fully aware of the 400 year history of equity jurisprudence. They know that many of the decisions from the past that conservatives hate were legitimate exercises of equity jurisprudence. And they know that they will be called on in the future to “do equity” and will do things like re-write laws, i.e. “legislate from the bench.” Yet they swear up and down that this is illegitimate and they will never ever ever do it. There is a word for people who say the exact opposite of what they know to be true, and it is not conservative. It is lie.

Supreme Court legislating from the bench on Trump travel ban

The travel ban, signed by Trump on March 6, banned most people from six predominantly Muslim countries from traveling to the United States. The original ban, signed with much fanfare on Jan. 27, was a blanket ban on immigrants, refugees or other travelers from Iran, Iraq, Libya, Somalia, Sudan, Syria and Yemen. But that was quickly struck down by a number of federal courts, based in part on Trump’s repeated statements that he wanted a “Muslim ban.”

Rather than appeal, the Trump administration drafted a new “ban” which was signed without much publicity. This “ban” was somewhat more nuanced: it didn’t include Iraq, it included provisions for a limited review, and it included only a limited, temporary suspension of refugees from certain countries.

The purported purpose of the ban was to protect the nation from potential terrorists. So, I should note briefly that there hasn’t been a single terrorist attack on American soil by an immigrant or traveler from any of the six listed countries. Six Iranians and six Sudanese have been convicted of plotting attacks, but none came to fruition.

While there have been a number of terrorist attacks in the U.S. over the years, since at least the first World Trade Center bombing in 1993, the vast majority of the terrorists (19) have come from Saudi Arabia, 14 have come from Pakistan and 11 from Egypt. But those are American allies, so…

In any event, Trump signed the second scaled-back travel ban, but it suffered the same fate in the courts, being struck down in both the Fourth and Ninth circuits. So it went to the Supreme Court, and on June 27 the court upheld portions of the ban. Well, sort of.

The Supreme Court held that the Trump administration could deny entry to anyone from the six listed countries who did not have a “bona fide relationship with a person or entity in the United States.” That seems reasonable enough. Such a relationship would imply some legitimacy. But here’s the thing, that limitation wasn’t in the executive order signed by Trump.

Where’d the court come up with this provision? Out of thin air, of course.

My entire adult life I’ve heard conservatives say that judges should simply interpret the law, and not “legislate from the bench.” During his confirmation hearing Chief Justice John Roberts said that the “role of the judge is limited, the judge is to decide the cases before them. They’re not to legislate. They’re not to execute the laws.”

Trump’s Supreme Court nominee Neil Gorsuch agreed with this idea in his confirmation hearings. Under the “Constitution, it is for this body (Congress), the people’s representatives, to make new laws, for the executive to ensure those laws are faithfully enforced, and for neutral and independent judges to apply the law in the people’s disputes. If judges were just secret legislators, declaring not what the law is but what they would like it to be, the very idea of a government by the people and for the people would be at risk.”

Right. Except when a Republican president needs a win.

Then the rules are different. Trump’s travel ban was restrictive and religious-based. But that’s not what Gorsuch, Roberts and the other conservatives on the court (Clarence Thomas and Samuel Alito) wanted it to be. They wanted it to be a win for Trump. And the only way for it to be a win for the president was for it to be limited and nuanced enough to survive a constitutional challenge.

So they took it upon themselves to create the law they wanted. They became legislators, and rewrote the law.