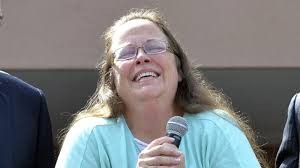 The Kim Davis saga has exposed a shocking misunderstanding of how the American legal system works. Congressman Thomas Massie of the 4th District of Kentucky said, “When Kim Davis refused to issue marriage licenses, did she break a state law or a federal law? If you think it’s a federal law, who wrote it? If it’s a state law, who wrote it?” The implication is that courts, including the Supreme Court, don’t make laws. This is incorrect. The United States has a common law legal system in which judges frequently make laws.

Most people think a law is a legal text and a binding rule that is written by and voted on by a legislative body, and then signed into law by the governor or president. Federal and state statutes are these kinds of laws, and this is what Congressman Massie is talking about.

But this isn’t the only kind of law in this country. The United States inherited our common law legal system from England, and in this system judges make laws. In Kentucky much of our contract law, property law, and tort law, are laws made by judges. In this system a judge would deal with an issue of first impression and craft a decision based on logic and general principles of fairness. Subsequent judges faced with a similar issue would read that opinion and apply it or modify the ruling based on different facts. This is known as deference to precedent. Over the years a consistent set of laws developed. Some people argue that these are “rules” not “laws,” but if you sue someone over a car wreck in Kentucky the court will apply the common law of torts to resolve your case.

In the 1960’s, in frustration over certain Supreme Court decisions, like banning prayer in public school or granting the right to an abortion, conservatives started to say that judges shouldn’t “legislate from the bench.” This ignores the fact that the Supreme Court has been doing this since almost the beginning of our nation. In 1803 in the case of Marbury v. Madison the Court said, “It is emphatically the province and duty of the Judicial Department [the judiciary] to say what the law is.” This means that Supreme Court rulings are the law of the land.

Conservative act like this began in the 1960’s, but the Supreme Court has always been making laws. In fact, throughout the 1800’s the Supreme Court issued rulings that created a very pro-business, free-market commercial legal system that skewed the law in favor of commercial interests and against consumers. In Fletcher v. Peck in 1810, the Court said that a state could not enact a law that interfered with a contract between two parties. This ruling had far reaching impact and allowed corporations to evade a wide variety of state laws. This allowed corporations to run rough-shod over the people until the Supreme Court changed course in the 1930’s. In Home Building & Loan Assoc. v. Blaisdell, in 1934, the Supreme Court said that a bank’s mortgage contract with a home owner was subject to state mortgage laws. “Public needs” require the “reservation of the reasonable exercise of the proactive power of the State [to be] read into all contracts.” Today it is the law of the land that private contracts are subject to states and local laws.

So when the Supreme Court ruled earlier this year in Obergefell v. Hodges, that state bans on same-sex marriage are unconstitutional because they violate the 14th Amendment right to equal protection, the ruling invalidated those state bans. The Court also said that marriage is a fundamental right which must be afforded to all couples, both opposite and same-sex. This ruling is the law of the land, even though no state or Federal legislature voted on it. This is how the American legal system works.