The following chart sets out the change in unemployment rate in the months after the minimum wage was changed. 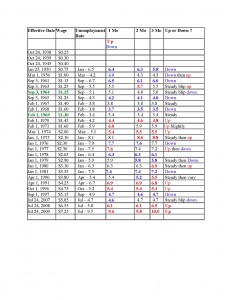 [Here’s a link to a bigger version of the chart: http://thedisappointedoptimist.com/wp-content/uploads/2015/02/Change-in-Unemployment-and-Minimum-wage.pdf]

If raising the minimum wage forces employers to lay off workers then the opposite should be true. Lowering it should spur hiring. But the scant statistics we have don’t really support this. The minimum wage was lowered from $1.25 per hour to $1.15 per hour in September 1964. The next month the unemployment rate was the same. It went down slightly, from 5.1% to 4.8 percent the next month, then up slightly to 5.0% the month after that. The wag was lowered from $1.60 to $1.30 in February 1969, but in the following three months the unemployment rate remained exactly the same at 3.4%. So, from the two statistically insignificant samples we have, lowering the rate doesn’t have much of an impact on hiring. But two data points are not persuasive.

One month is not a statistically valid sample, so I looked at unemployment over a three month period after the rate was raised. In most cases the rates jumped around a bit. In nine cases the unemployment rate went down and stayed down over a three month period. In seven cases in went up, and stayed up. In most other cases it jumped around. A few times it went up then down, and a few times it went down then up.

One important point to note: if you look at the unemployment rate charts of any year you will notice that they are constantly moving, going up and down. There are innumerably factors that impact the employment rate. These rates are “seasonally adjusted” so they take in to consideration the increased retail employment in November and December, and the increased construction employment in the summer months.

Based on this data I can say that raising the minimum wage does not cause unemployment. It is a canard. It sounds logical, but statistics do not support the contention.