OK, I get it. But they never really explain what that means. What are they talking about when they say freedom? Based on other things they talk about, I think they mean the ability to do whatever you want. You are free when you can do what you want.

If this is what it means to be free, who is free? Who in this world can do what they want?

To understand this kind of freedom I apply what I call the Marbella Index. For those who don’t know, Marbella is a resort on the Spanish Mediterranean coast. It is frequented by rich Russian plutocrats, and tourists from across Europe, though mostly Germans and Scandinavians. The beaches are frequented by overfed Swedes and Germans in tiny speedos sporting their national flag, their Teutonic paunches drooping over skin tight lycra. 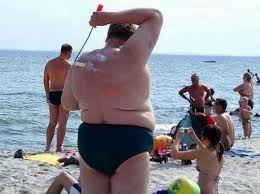 In Russia, to be truly free, you have to be a former communist party member, or now the son of a former party member, who got a slightly nefarious deal on a company during the early years of the first Putin administration.

In the rest of Europe all you need is a job, and you have a pretty decent wage and lots of vacation time. France is even famous for its vacation time. There are plenty of beaches on the French Mediterranean, so you don’t see many in Spain. But Germans and Scandinavians flock to Marbella, as well as beaches and resorts around the Mediterranean, from Spain to Turkey across the northern coast, and from Morocco to Egypt on the southern coast (though Islamic extremist and political instability are making those resorts far less popular).

In fact, if you go to fancy resorts around the world the people you see most frequently are Europeans, along with plenty of Australians and a surprising number of New Zealanders. This makes sense around the Mediterranean since it is close to the rest of Europe. But it is surprisingly true throughout the Caribbean, the Pacific and the Indian Ocean, which are all far from Europe. There are plenty of American at Caribbean resorts, but you are just as likely to hear French or German as English. And you’re just as likely to hear that English with a British or Australian accent as an American accent.

I know people will argue that there are so many resorts in the United States that most Americans stay home, and that is certainly true. But Brits go to Bristol, and Germans ski in Bavaria. But the beaches of the world are full of middle class Europeans.

So based on the Marbella Index it’s the Europeans who are the freest people on earth.